GBE classes are aligned with the Gracie Barra Program Structure developed by Master Carlos Gracie Jr. to meet specific learning needs for people of varying ages, gender and levels. Our clean, friendly, safe, and progress-oriented environment allows students to have a challenging, inspiring, and friendly learning experience that is ingratiating and welcoming.

Our History of BJJ Instruction

GBE was founded in 2005 by Master Nelson Monteiro, a 6th Degree Black Belt and Prof. Rafael Ramos, a 4th Degree Black Belt.  Both Nelson and Rafael earned their Black Belts under Master Carlos Gracie Jr. GBE was the first ever Jiu Jitsu School in San Diego. Our founders have extensive tournament experience including over 40 championship tournament wins between them, including World Masters Championships. Their imprint on the Jiu Jitsu community is well recognized and significant, including establishment of the most prestigious Jiu Jitsu Tournament in the world today, ADCC, Abu Dhabi Combat Club.  Today, we are proud to be the largest provider of Self Defense and core-value education in Encinitas and the greater San Diego area.

Gracie Barra is for all people who strive to improve discipline, wellness, respect, and a well-balanced life-style. We serve all members of our community, from beginners to advanced participants. People with no training experience who want to lose weight and learn self-defense; busy executives and professionals that are looking for a stress relieving activity; parents that are searching to provide their children with the gift of self-confidence, self-defense and self-respect; as well as experienced martial artists that aim to further enhance their martial arts skills. Everyone is welcome.

We welcome visitors and we are confident that you will find our school an exciting, challenging, and encouraging place to help you reach your individual learning and fitness goals.

Jiu Jitsu for Everyone!

We want to do for others, what Jiu Jitsu has done for us. 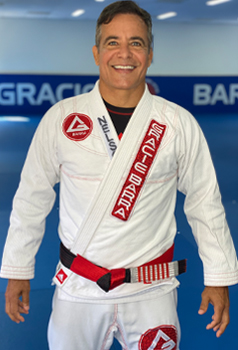 Professor Nelson Monteiro was born and raised in Rio de Janeiro, the birthplace of Brazilian Jiu-Jitsu. He started training when he was 13 years old under the direct tutelage of Master Carlos Gracie Jr. at the world-renowned Gracie Barra Academy. With unrivalled dedication, Professor Monteiro trained diligently until he was awarded the black belt in 1989; and in the same year, he received a bachelorʼs degree in physical education from Gama Filho University.

Professor Monteiro is one of the original pioneers of Brazilian Jiu-Jitsu in the United States. After receiving his black belt and graduating from college, Professor Monteiro moved to San Diego in 1990 and began teaching Jiu-Jitsu out of his garage in Encinitas. After steady growth in enrollment, Professor Monteiro moved to a larger space in Del Mar, where the academy continued to prosper. After the 1993 debut of the Ultimate Fighting Championship, Brazilian Jiu-Jitsu experienced a meteoric rise in popularity. The world had now witnessed the effectiveness of Brazilian Jiu-Jitsu as the unassuming Royce Gracie used leverage and technique to defeat his larger and stronger opponents. People from all walks of life began to search for qualified instructors. As a result, the academy experienced even greater growth. 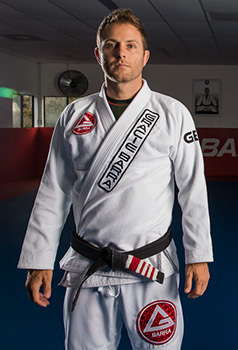 Professor Rafael started training at the age of 13 , under legendary Master Carlos Gracie Jr. at the original Gracie Barra School in Rio de Janeiro , Brazil. Under Master Carlos tutelage Rafaelʼs extensive knowledge of the “gentle art” was formed at the same mats of the best BJJ instructors and fighters ever known. As a competitor Rafael won and placed in the biggest events, including  multiple Brazilian Nationals, Rio de Janeiro State Championship, Brazilian Team, Pan American.

Today, Rafael Ramos assumes, as his main mission, the task of passing on to students the teachings and techniques accumulated over a life of arduous training under the tutelage of Master Carlos Gracie Jr. And he maintains close ties to the Gracie Barra academy, to which he is grateful for his apprenticeship, and for the family values he learned that are so important to him.

As he puts it: “This sport is too damn fun not to go as much as your life permits!!!” 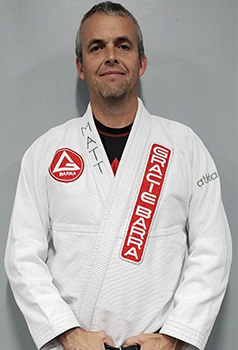 Professor Matt Smith has headed GB Encinitas’ Children’s Program and taught the Adult Fundamentals Programs since 2007. A lifelong martial artist, Professor Matt has taught children and adults for over 25 years.

He brings a wealth of teaching expertise and methodology to BJJ, with extensive experience in recreational program development as well as competitive program coordination.

In addition to his black belt in BJJ, Professor Matt is a Kukkiwon certified 5th degree black belt in TKD. He is CPR and First Aid certified and served as a U.S. Infantry Marine. 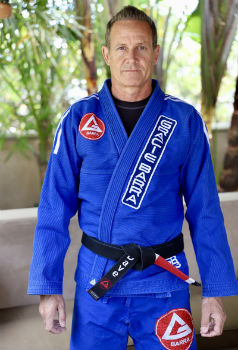 Following 25 years in a corporate environment, Professor Dave was looking to transition his time to a rewarding community cause. It was during his 8 years of training Jiu Jitsu under Master Nelson and Professors Rafa, that he began volunteering and sharing his experience with the school he now considered family.

As an Instructor in our Kid’s Program, Professor Dave spends much of his time investing in our young students on the mats, at tournaments, and in our social and community activities. He gets great joy in seeing our kids become strong, respectful, confident members of our amazing school and community. “I am grateful for finding this school that has touched so many lives in a profound way.”
Close
READ MORE

Jiu Jitsu for Everyone!

We want to do for others, what Jiu Jitsu has done for us.